CONVENTION SCHEDULE
Here are the conventions where we will be running games:

Sorry, no conventions are scheduled

Please contact us for support if you will be running ATG's games at your convention!


Naval SITREP #62 is now available for purchase at the WargameVault or our Naval Sitreps page.
May 1, 2022 Updated Harpoon Scenario Book available


In Mahan's Wake is now available on WargameVault and our Dawn of the Battleship product page.
Oct 27, 2021 New Naval SITREP


Naval SITREP #61 is now available for purchase at the WargameVault or our Naval Sitreps page.
Oct 1, 2021 China's Navy Harpoon Annex


Our latest product: China's Navy is now available for purchase at the WargameVault. This includes data for Chinese ships, aircraft, sensors, and weapons for use in Harpoon scenarios.
Jun 1, 2021 June 2021 - Second Printing


We are releasing updated versions of the Harpoon V Rules, the Player's Handbook, Expanded Critical Hit tables, Jumpstart, America's Navy, America's Aircraft, Russia's Navy, and Russia's Aircraft. These will replace the current 1 January 21 .pdf upload, and the 3 July 2020 (first) printing. The prices do not change.

The covers of the Rules, Handbook, and the Annex books will have "June 2021 Printing" added in the lower right corner.

The new .pdf versions will be available immediately on WargameVault for those who have already purchased them, at no cost.

Unfortunately, we cannot update the print versions the same way, or as quickly. While the files will be sent to our printer on 1 June, they must be approved and processed. When that is done, we can order a proof copy, which is sent to us by post. Once we have checked the proof, we can make the print versions available for sale again. The process usually takes about two weeks.

The only exceptions to this are the Jumpstart and the Expanded Critical Hit tables, which are free and only available in .pdf form. The current rules errata, which has grown to 14 pages (!) will be frozen, and a new errata for the June 21 (second) printing will be started. We will do the same with the errata for the other print books.

This is not going to be a regular Thing, but there have been enough corrections, clarifications, changes, tweaks, and refinements so that it's necessary.
Apr 23, 2021 Harpoon V Chinese Translation 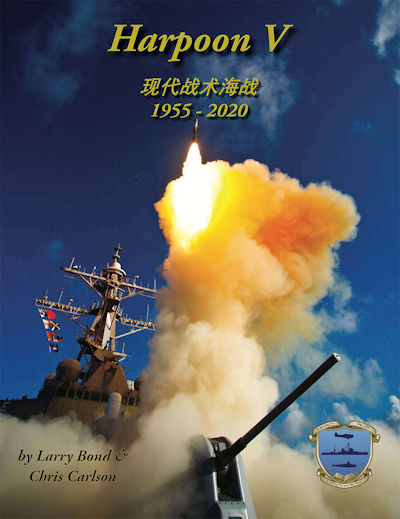 The Admiralty Trilogy Group (ATG) is pleased to announce that Harpoon V, its award-winning tactical modern naval game system, has been translated into the Chinese language.

The initial release will consist of the rules book (“Yu Cha V”), the Player’s Handbook, which combines often-used tables and charts into a smaller booklet, and the Jumpstart and Expanded Critical Hit tables.

The Jumpstart and Expanded Critical Hit Tables are both free .pdfs designed to introduce players to the game, and to speed play.

Beyond these titles, Mr. Chang will also translate other games in the ATG system, such as Dawn of the Battleship, into Chinese.

We are excited at the chance to connect with the large and active gaming community in China, and also expect that our interaction with them will improve the game for all players.

The four Chinese-language titles are available as downloadable .pdfs at the WargameVault.

Print versions of the rules and handbook will be available after the standard approval/proof process by the printer.

Email us with questions or suggestions at adtrgroup@aol.com. See our tactical naval game system at the WargameVault. Visit the Admiralty Trilogy Group Facebook page, our Groups.io page (AdmiraltyTrilogy@groups.io), or our Discord Group (https://discord.gg/t7pekGk).

Harpoon version 5 is now available for purchase at WargameVault. For product details, see the Harpoon page on our website.

There are also new materials for Harpoon version 5 on our Game Support page.
| HOME | DAWN OF THE BATTLESHIP | FEAR GOD & DREAD NOUGHT | COMMAND AT SEA | HARPOON |